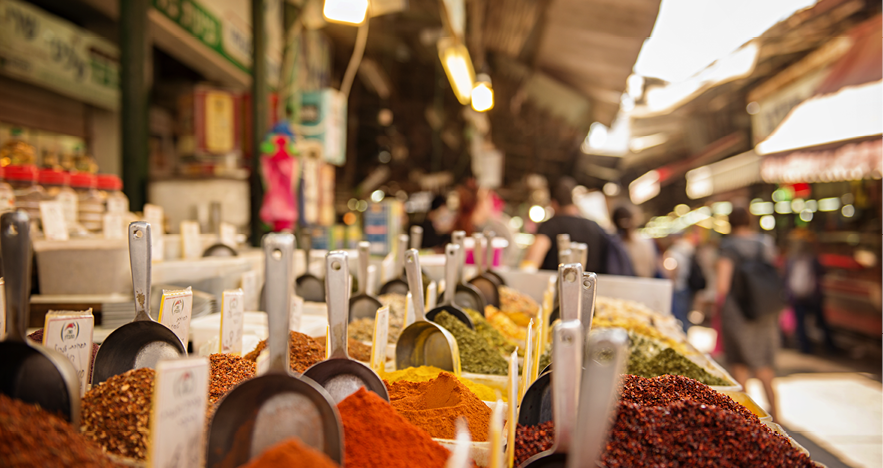 A TASTE OF ISRAEL
Only quite recently, the Land of Israel has been widely acknowledged as a global culinary destination for the gastronomically minded.

Boasting fresh vegetables, unique spices and lots of passion, Israel’s culinary scene is essential to its culture. Israel’s dining culture is a unique experience rooted in tradition, eclectic and modern atmospheres, and the contrast between the two. In the past few years, Israel’s fusion cuisine has been taking the world by storm with Israeli restaurants popping up in London, Paris, Berlin, New York and other major cities, proving what Israelis have already known to be true: its food ranks among the best in the world.

With over 5,000 years to chronicle, Israel is abundantly filled with ancient and modern history. We invite you to learn more about the intersection between food, religion, history, and politics. Inspired by the global interest in Israeli cuisine, you’ll explore this small, yet diverse country by meeting locals, hearing their stories, tasting their food, and experiencing the rich and diverse culture for yourself.

TEL AVIV – SALTY, SWEET, AND SAVORED MOMENTS
Perched on the shores of the Mediterranean Sea, Tel Aviv is one of the world’s top travel destinations. Israel’s second largest city has it all, but most importantly, Tel Aviv has a creative, original and award-winning culinary scene. There is a dining option for every palate and budget, from sophisticated gastronomic Chef-owned restaurants to local traditional shops. Tel Aviv was even voted as one of the top destinations for vegan travelers.

While touring, you’ll taste the best Tel Aviv has to offer. You’ll delight in iconic hole in the wall places known for traditional Israeli dishes. To experience the modern and inventive flair of Tel Aviv, dine at Chef Eyal Shani’s exclusively eccentric HaSalon. Open only on Wednesdays and Thursdays, their lack of official menu inspires the ultimate in culinary creativity. From the unique flavors of Chef Ran Shmueli’s creations at Claro to midnight pita sandwiches at Jasmino, the Tel Aviv portion of this culinary journey will show you the diversity and uniqueness of Israeli food culture.

Where to Stay? The Norman Hotel Tel Aviv
The Norman Tel Aviv brings unprecedented sophistication and boutique charm to the historic Mediterranean city. Situated perfectly in the heart of Tel Aviv, The Norman redefines the art of hospitality, capturing the timeless elegance of the 1920s paired with the comforts of a world-class luxury hotel.

GALILEAN AROMAS
The fields of the Jezreel Valley, the mountains filled with orchards and vineyards in the upper Galilee Region, and the elevated plains of the Golan Heights make up the agricultural heart of Israel and its wine country. Here you can find some of the best wineries (many of whom are ranked as world winners), boutique growers, cheese makers, olive oil producers, and even one of the first caviar farms in the world! Galilee harbors a mosaic of cultures: Jewish, Arab, Christian, and Druze. The cultural diversity gives this region a distinct culinary character.

JERUSALEM – A PERFECT BLEND OF SPICES
There is no place in the world like Jerusalem. As a center for three major monotheistic religions, the city is filled with historical and religious layers both architecturally and culturally. While famed for its religious significance, Jerusalem’s thriving culinary scene has gained momentum and continues to develop exponentially.

By exploring Old Jerusalem, you’ll discover the best food stands located in twisted ancient alley ways that sell classics like hummus, falafel, shawarma, and sabich. A culinary Jerusalem tour would not be complete without a private tasting tour of the Machne Yehuda marketplace brought to you by the undisputed queen of the market herself, Chef Tali Friedman, followed by a hands-on cooking workshop at her roof top atelier. Your Jerusalem adventure ends at arguably Israel’s best restaurant, Machneyuda, known for its table dancing.

Where to Stay? The Orient Jerusalem by Isrotel Exclusive Collection
The Orient Jerusalem is the newest hotel in Jerusalem’s luxury market. It is located in the city’s western German Colony, just 20 minutes from the heart of the Old City and close to HaTachana, the city’s first-ever train station (built in 1892), which has since been transformed into a collection of designer boutiques, trendy cafes, restaurants, and galleries.

The Orient Jerusalem features a wellness area and two swimming pools (including a rooftop infinity pool with a 360° panoramic view of the city) and the best breakfast buffet in town!