When I was in Edinburgh in October, I stopped by to check out the Hotel Du Vin. I wasn’t able to see any of the rooms in person (the hotel was full), but it was a really lovely hotel, and in a good interesting area of Edinburgh. They have a room where they can host private dinners and the wall paintings are themed around the Burke and Hare storyline, described by Wikipedia as follows: 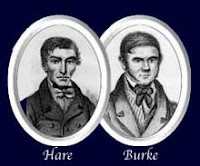 The Burke and Hare murders were serial murders perpetrated in Edinburgh, Scotland, from November 1827 to October 31, 1828. The killings were attributed to Irish immigrants William Burke and William Hare, who sold the corpses of their 17 victims to provide material for dissection. Their purchaser was Doctor Robert Knox, a private anatomy lecturer whose students were drawn from Edinburgh Medical College. Their accomplices included Burke’s mistress, Helen McDougal, and Hare’s wife, Margaret Laird. From their infamous method of killing their victims has come the word “burking”, meaning to purposefully smother and compress the chest of a victim, and a derived meaning, to quietly suppress.

Given that the hotel is located in Edinburgh’s Old Town and within a former asylum, it is the perfect backdrop! 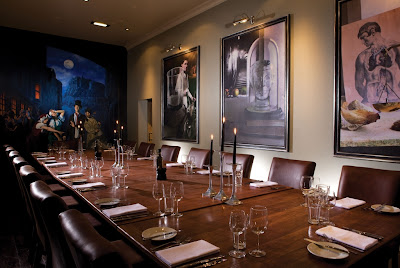 The hotel is small (47 rooms only) and it is very nicely appointed, appealing to a range of styles/guests whether business or pleasure. The main areas of the hotel have incorporated a traditional touch utilizing the building’s nuances to its advantage, but they have included modern and contemporary elements that makes it very current in decor and taste while not abandoning its heritage. They have a fabulous wine tasting room, and a whisky nook.

Located within easy access of the Princes Street area, it would be only about a 10 minute walk (though it is up hill on the way back), and right around the corner from Greyfriars Bobbyand other areas of interest. With Princes Street being so busy and the tramline still disrupting foot and vehicular traffic, this is a wonderful option avoiding that area, but keeping it within easy reach. Just the location of the hotel conjures up all sorts of imaginary and real historical tales because of the character of the Old Town, it’s great. Loved it.Article by Jean Campbell. Photos: courtesy Hotel du Vin.