18 Apr6 Crazy & Delicious Fair Foods to Get You Ready for Summer! 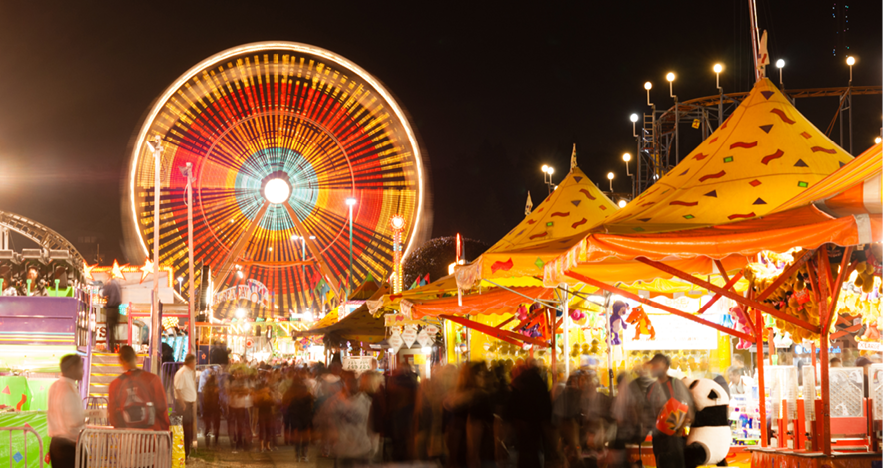 Are we the only ones ready for sunshine and the outdoors? Summer time conjures up visions of state fairs, starry nights, and delicious treats!

State fair food offerings are considered by many as a test of one’s palate and are the highlight of the fair-going experience. Dining options have come a long way from the once-basic choices of funnel cake, cotton candy or loaded hot dogs. Now, one can expect the food to be an adventure all its own. Here are six of the craziest fair foods that made us do a double-take, either for their creative ingredients or interesting-sounding combinations!

Shrimp’n Grits Sunday
Ryan Hagy, owner of DeAnna’s Food, was inspired to recreate the classic dish of shrimp and grits so that he could enjoy it on the go. Hagy starts with local stone ground grits, which he soaks before cooking to ensure a creamy texture. He simmers them with crumbled bacon, cheddar, Gouda and cream cheese, then piles them in a sundae cup along with marinated white shrimp. Yum!
Where: South Carolina State Fair
When: October 9-20, 2019
Learn More

Emu Tacos and Ostrich Quesadillas
Where’s the beef you might ask? Calling on some of North Carolina’s more exotic birds, NC State Fair vendor Raintree Farms offers emu tacos and ostrich quesadillas from one of the most eye-catching booths on the scene. Trust us, you literally can’t miss the 15-foot inflatable ostrich head.
Where: North Carolina State Fair
When: October 17-27, 2019
Learn More

Arizona Fry Bread, aka Navajo Taco
Epitomized by a texture that’s somewhere between a doughnut and a tortilla, this iconic treat features a simple dough made of flour and water. It’s fried in hot oil, then draped with sweet toppings like powdered sugar and honey or a sundae-inspired medley of strawberries, ice cream and whipped cream. Fry bread can also go savory with taco-inspired fillings, in which case it’s known as a Navajo taco.
Where: Arizona State Fair
When: October 4-27, 2019
Learn More

Wine Slushy
Are you a fan of adult icy beverages? Well you’re in luck, the California state fair wine slushy is the refreshing delight you’ll need to wash down all that tasty food. Some of the offerings include Wild Vines’ blackberry or strawberry and Madria Sangria Moscato, an icy white sangria with peach and apple notes.
Where: California State Fair
When: July 12-28, 2019
Learn More

Organic Hemp Burger
Who says fair food can’t be vegan? This vegan-friendly hemp burger is served at the Hemp House Grill. The organic patty’s signature ingredient is the hemp nut, which is combined with quinoa, garbanzo beans and fresh herbs to ensure a tender texture that mimics a well-cooked burger. The burger’s savory-nutty flavors are well-complemented by a sweet-spicy hemp sauce boosted with garlic and basil.
Where: Oregon County Fair
When: July 12-14, 2019
Learn More